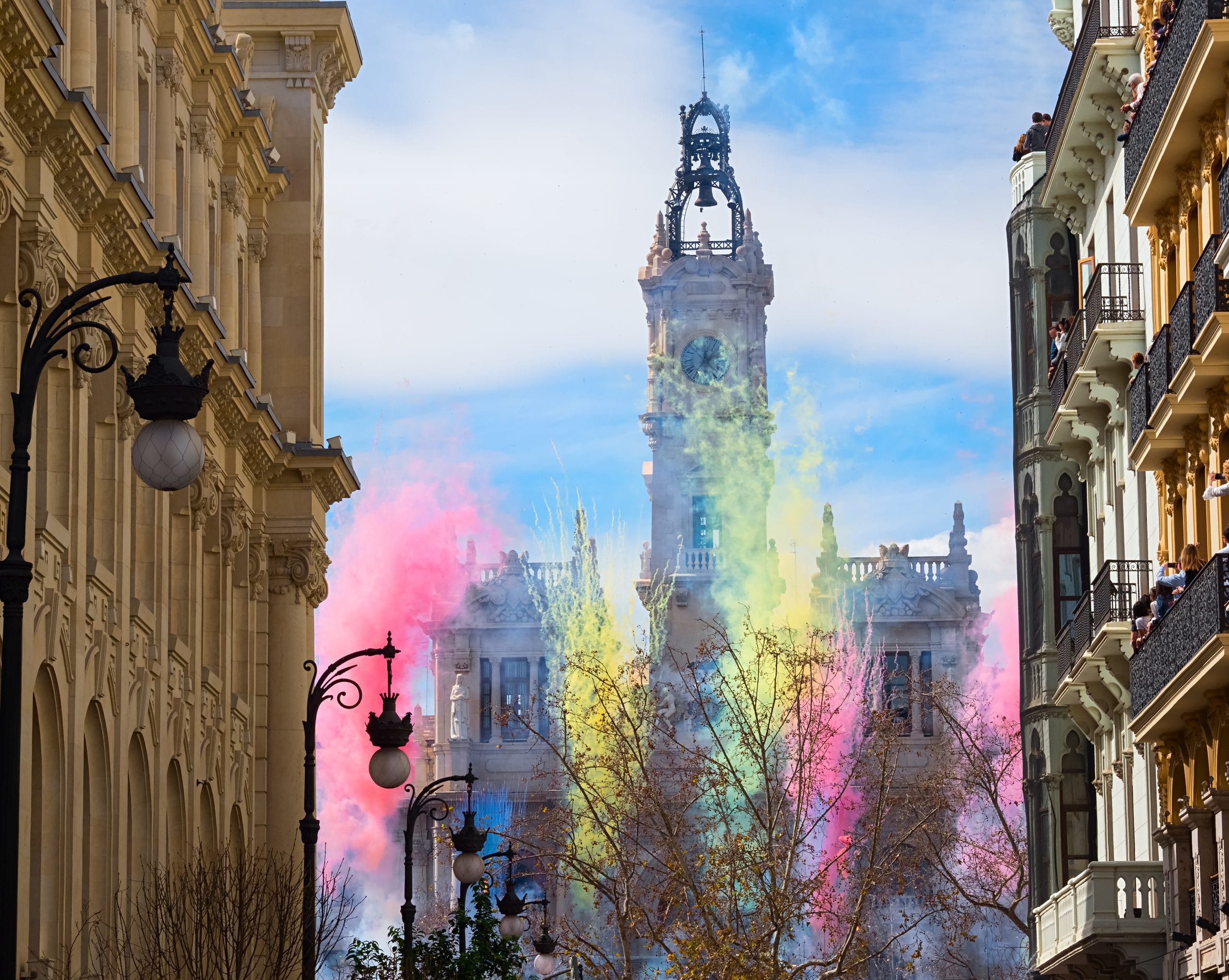 In today’s article we are going to talk about Las Fallas, a Valencian tradition declared World Cultural Heritage by UNESCO in 2016 and whose origin dates back to the 18th century.

This festival is known in Spain and overseas, and attracts many visitors every year. Let’s take a look at its origin and some of the most symbolic acts of Las Fallas.

1. Origin of the Fallas

There are different versions on the origin of Las Fallas. The most popular one is that they began when the carpenters of the city made bonfires in front of their workshops to burn old junk and remnants of wood on the eve of Saint Joseph, which is celebrated on 19th March. They would clean out their workshops and at the same time, place torches on the end of poles along the piles of wood, as spring was approaching and they no longer needed the light that they provided.

The popularity of Las Fallas grew during the 19th century at the same rate as their increasingly critical and ironic sense, depicting current affairs and important social events in the monuments, all with a sense of humor.

In 1901, Valencia City Council awarded the first prize to a fallero monument, which caused Las Fallas to go from being only a critical representation of society to being more artistic and beautiful. Given the new importance of the artistic aspect, the falleros had to hire artists such as sculptors, carpenters or painters to design the falla. The profession of the fallero artist was born. 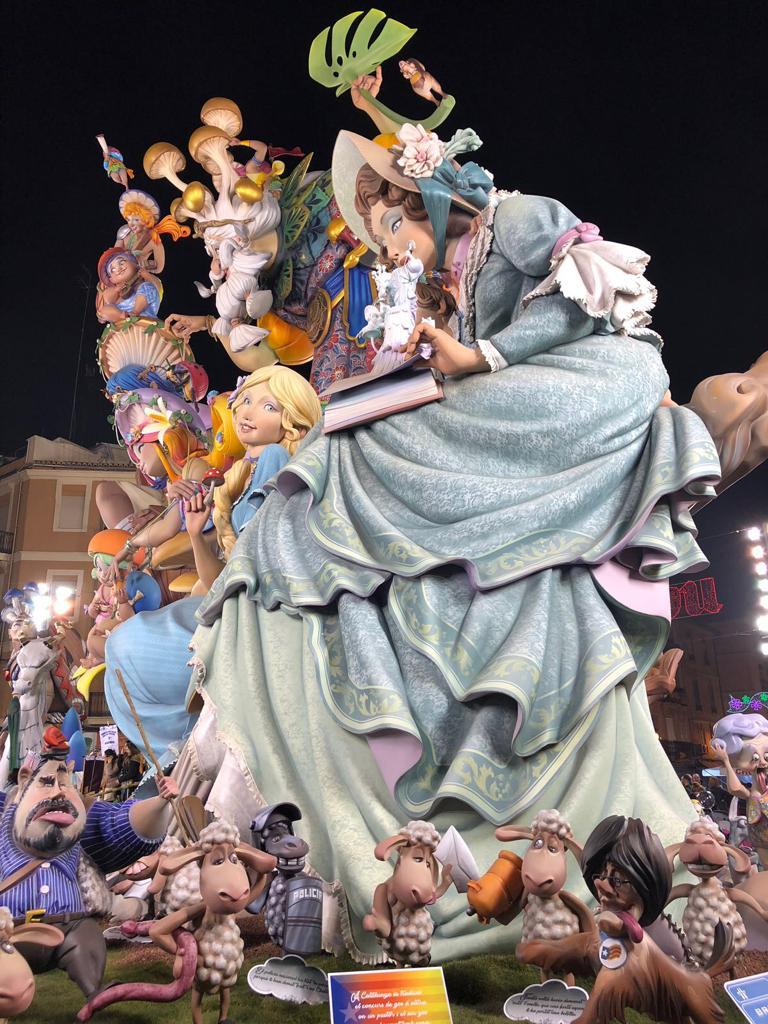 Chronologically, the most important acts that Las Fallas has passed through until reaching what we know today are:

After these events, Las Fallas appeared in Valencia as we know them today. At first, Las Fallas were celebrated only in the city of Valencia, later they began to be celebrated in more towns in the Valencian Community.

Las Fallas in Valencia are celebrated from 15th to 19th March, during which time the streets host the monuments and marquees, which serve as a meeting point for the groups of falleros. During the week of Fallas, people visit the most important monuments, and at night the streets become small discos, where each Casal Fallero lives festival intensely for almost 24 hours a day. Sometimes the events organised by the Casales are private (only for the falleros) and other times visitors can join in with the party.

Let’s have a look now at the most important events on the Fallas calendar.

This peculiar act takes place on the last Sunday of February and initiates the Fallas. It is celebrated in the Torres de Serrano, where the Fallera Mayor of Valencia brings together the Falla Commissions to invite Valencians and visitors alike to the celebration. In this event, the mayor or mayoress of Valencia City Council hands over the keys to the city to the fallera mayor.

Several activities are proposed throughout the day, but the moment of La Crida is the most important. At 8pm, you can listen to the mayor of Valencia’s speech and those of the two Falleras Mayores, followed by a firework display on the river Túria and a sound and light show at Torres de Serrano.

From 1st March to the 19th at 2pm, the Mascletás begin in the Plaza del Ayuntamiento. Valencians favour this particular aspect of Las Fallas, where for 5 minutes after the falleras mayores announce  “senyor pirotécnic pot començar la Mascletà” (“Mr. Pyrotechnic, start the mascletà”) the square becomes a cloud of sound and colour. Firecrackers shake the ground under the feet of the lucky attendees who enjoy the smell of gunpowder that floods the square as well as your senses.

The mascletás are organised by a different pyrotechnic company each day, and can sometimes be accompanied by firecrackers with colored smoke representing, for example, the flag of the Valencian Community.

From 15th March to the 19th, at eight in the morning, the falleros begin to wake up the city’s inhabitants by throwing firecrackers in the streets accompanied by their bands of music.

This tradition is criticised by many residents, since only March 19th is a public holiday. It is no coincidence that this is the time many Valencians decide to go on holidays and/or to their second home !

5. La Plantà : The monuments take to the streets

The plantà in València takes place on 14th and 15th March and is the start of the Fallas week.

Las Fallas are built on the streets, and wait for the jury to qualify each of them for the subsequent distribution of prizes, as well as be enjoyed by all the visitors, of course. 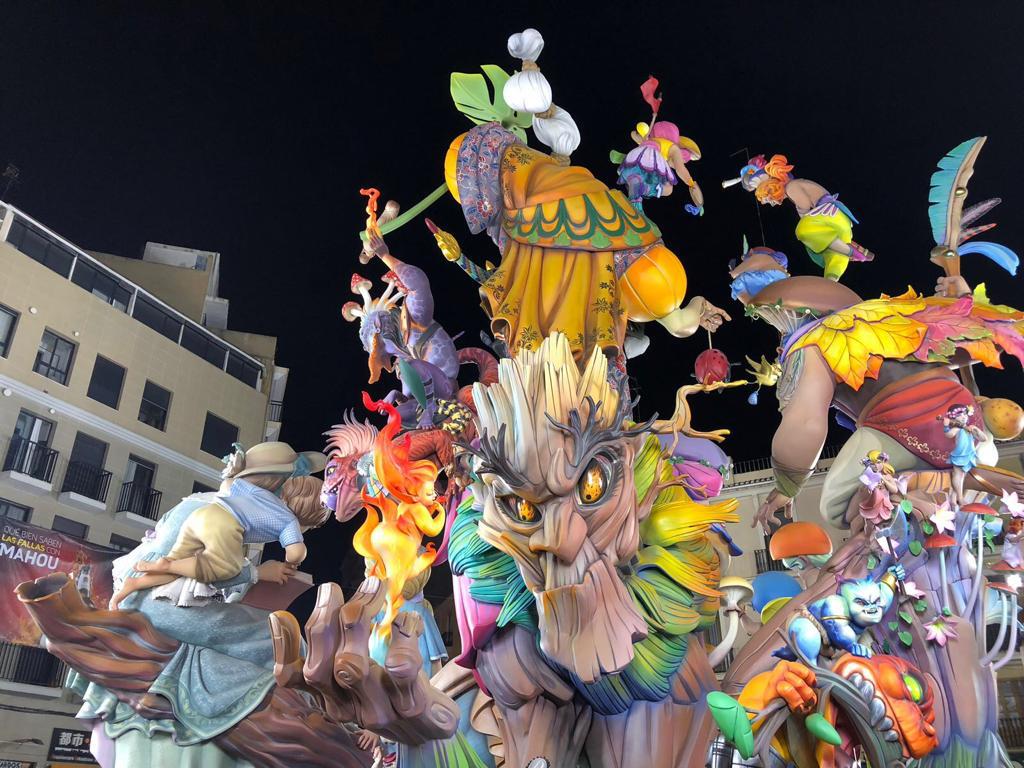 6. La Ofrenda : Emotional tribute to the patron saint of València

The Virgen de los Desamparados is the patron saint of the city of Valencia and the Valencian Community. On 17th and 18th March, the falleras of the Fallas Commissions parade through the city until they reach the Plaza de la Virgen where the representation of this saint, with a height of 14 metres, is located.

In this act each fallera offers a bouquet of flowers to the virgin. With the contributions from all of the falleras, a tapestry of flowers is created, each year with a different design. 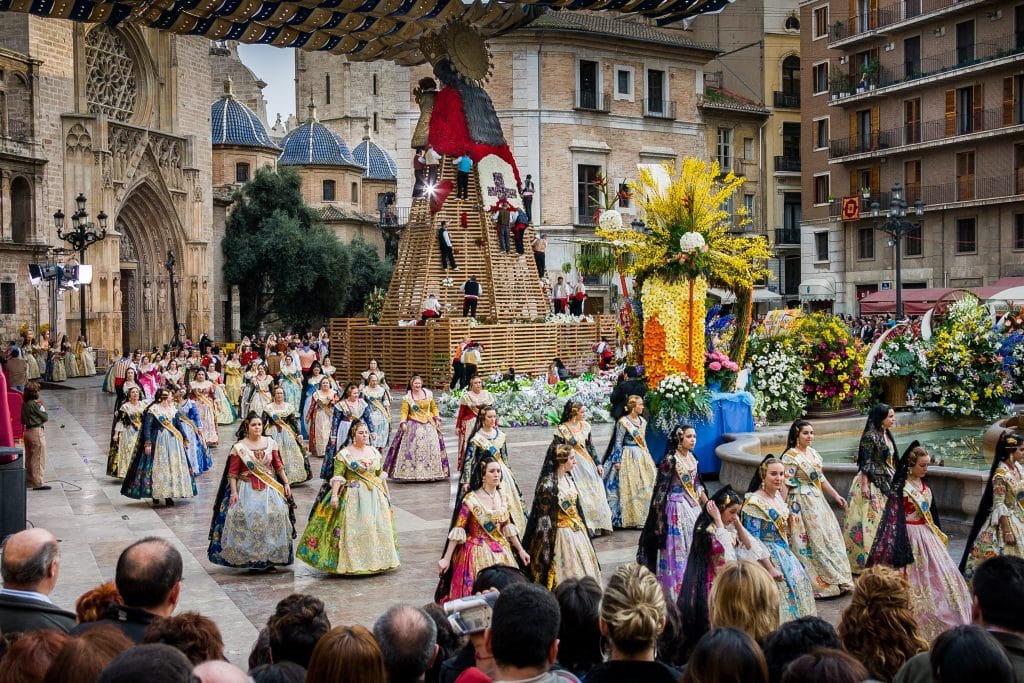 It is one of the most emotional acts of the festival in which the falleras, with tears of emotion, show their devout love for the patron.

From 15th to 18th March, a series of fireworks displays take place in Alameda that begin between midnight and 1.30am, and bring together several tens of thousand people.

The most important of all is known as the Nit del Foc, which takes place on the night of 18th March after the Fallera Mayor finally offers her bouquet of flowers to the Virgin. The light show can last more than 20 minutes. 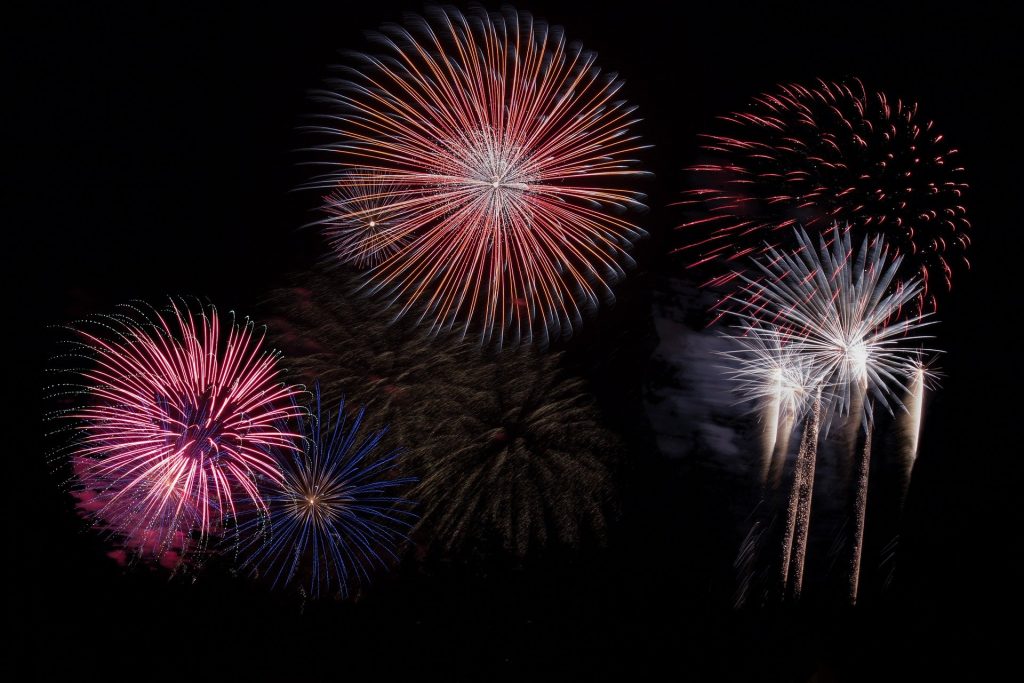 On the night of 19th March, La Cremà takes place. It is this act that marks the end of Las Fallas festivities, where all the Fallas monuments of the Commissions are burned. 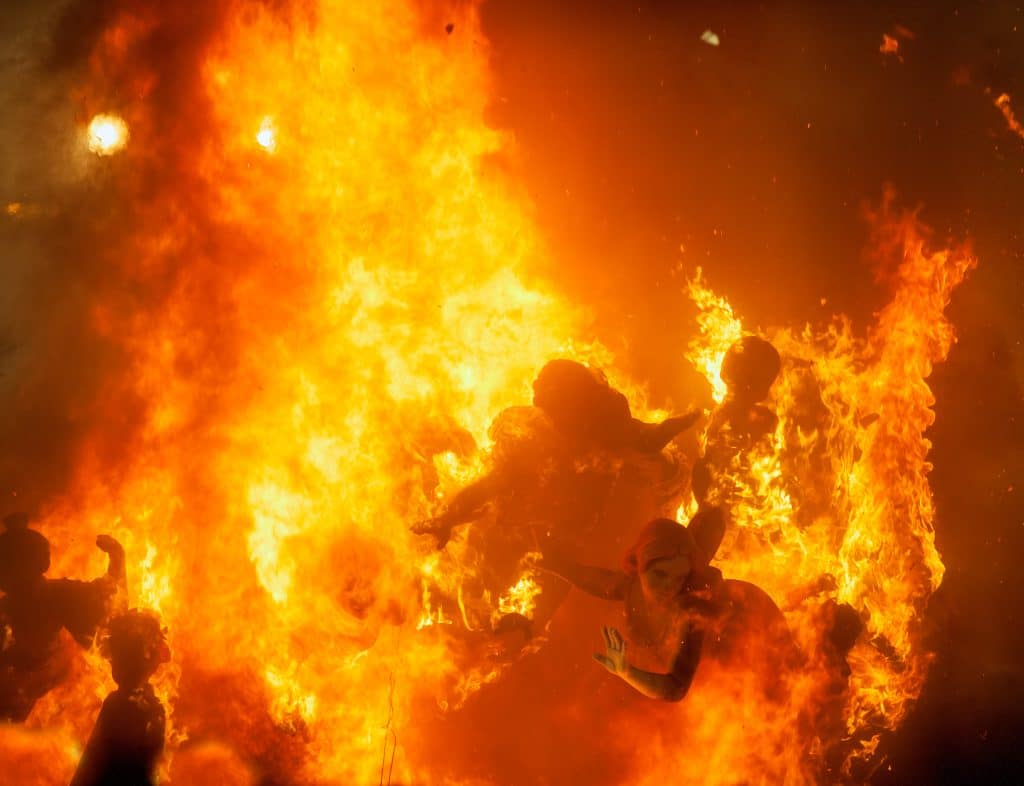 It starts at 10pm with the fallas for children followed at midnight by the fallas for adults. The last falla to burn is the one in the Plaza del Ayuntamiento at 1am.

Currently, some Falla Commissions participate in the contest for the best lighting. They illuminate the streets belonging to their specific falla with multicoloured lights.

Some of them do shows every night during Fallas week, where they play music and turn on the lights to the beat of the music.

In fallas, you must eat buñuelos, a sweet snack made with pumpkin, flour, yeast and water accompanied by hot chocolate.

You will find buñuelos and hot chocolate on many street stalls in Valencia and the surrounding areas.

The typical Valencian fallera dress appeared in the sixteenth century and began as a work suit for women farmers, although with the passage of time the suit became a symbol of elegance.

Being a fallera is real tradition for Valencian people and the price of the suit starts at around 2,000 euros and can be as much as one wants to pay – up to 12,000 euros or more.

Las Fallas are a Valencian tradition defined by parties and a lot of different events that last almost 3 weeks. Numerous activities take place and the city lives for Las Fallas until 19th March. Declared Unesco World Cultural Heritage, each year from 15th March they attract more than one million visitors per day.

If you like the sound of this festival, we invite you to come and celebrate it. If you have any questions or want to know more about Las Fallas, you can contact us through contact@vivreavalencia.com.

If you have already experienced Las Fallas, tell us an experience or what you liked the most about this spectacular party.